Taste of the Sea from Landlocked Restaurant in Hardwick VT 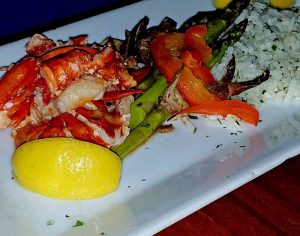 Downside: Parking – Street Side or Public Lot Only; A Little More Expensive; Not Really Meant for Younger Children; Get’s Loud When Busy

The Scale House Restaurant in Hardwick brings a new flavor to the NEK’s Restaurant scene – that of fresh seafood with a fine dining flare. 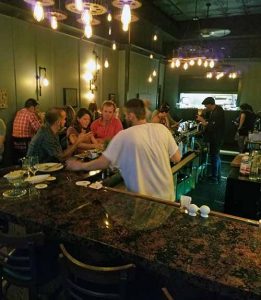 While there are restaurants in the area that serve seafood, the Scale House makes it the major theme of their menu and dishes are built to accentuate the delicate flavors of the seafood instead of hiding it among other ingredients. This brings an upscale seafood restaurant to the Kingdom.

The dining space has been decorated in a modern industrial style with high ceilings, exposed Edison light bulbs, and using pipes, gears, and hardware as decorative features. All of this is mixed with wood accents.

When you walk in the door you are first greeted with the massive bar that dominates the first room. Once you’ve taken that in, the second dining room beyond beckons with a more sedate dining experience.

The Menu at the Scale House Restaurant in Hardwick 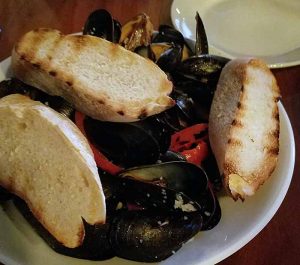 I had the pleasure of dining with a group of people on my first visit to the Scale House. This meant getting to try a number of dishes – sharing is truly the best way to dine out!

There were four of us. And after ordering cocktails we started on the difficult task of choosing from the menu.

I found the menu to be too large, with so many options it really was difficult to narrow it down and pick one, but we managed in the end.

We started with a few tapas. For those that are unfamiliar with tapas, these are small plates that enable diners to order a few different choices as a meal, or you can substitute them for an appetizer. 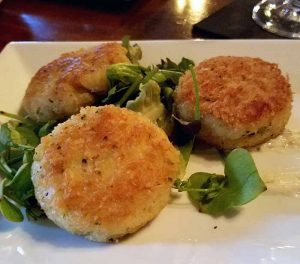 We tried four different options: A Caesar salad with a smoked trout add on, fish cakes, muscles, and tuna.

The Caesar salad had a delicious dressing on it. It wasn’t as sharp as a traditional Caesar and tasted more creamy. The portion size was large – this would be difficult to eat as an appetizer if you planned on getting a full dinner, especially if you choose to add a protein too it. We split it between the four of us, but if ordering on your own I suggest pairing it with other tapas in place of a full entrée. The smoked trout had wonderful flavor, and wasn’t dried out.

The fish cakes were my favorite of the four small plates. They were cooked well with a nice crispy outside and flaky center. The cake itself did not contain too much binder so the fish wasn’t overpowered by filler. With added lemon and the accompanying tarter sauce, they were a light refreshing appetizer. 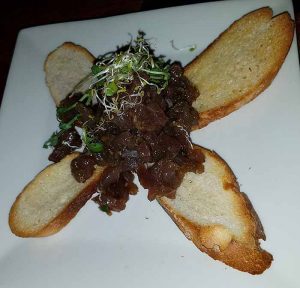 The muscle dish included a large portion of the protein with a few pieces of crusty bread. They were well cooked, and served with a light butter/wine sauce. While I found them delicious, paired with the stronger flavors of the smoked trout and the tuna, the muscles faded into the background a bit on this occasion.

The tuna tartare was a show stopper – a pile of Ahi tuna, cubed instead of sliced, served with focaccia toast points. The night we were there, the ahi was dressed with sesame giving the dish a heavier flavor. 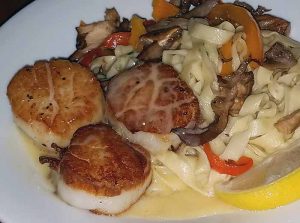 I could have made a meal out of the small plates, but we were there to try out the whole menu and so entrees came next.

I ordered Pan Seared Scallops. This dish arrived beautifully plated and smelled wonderful. At first glance I noticed the sear on the scallops – a rich golden color. As I cut into one, they were cooked perfectly and well seasoned. The three scallops that came on my plate were large and in the end I wasn’t able to finish them, so was willing to share with the rest of my table. This dish came with a side of house made fettuccine tossed with mushrooms in a buttery sauce. The texture on the pasta was wonderful – and fresh pasta is a unique find in the Kingdom. 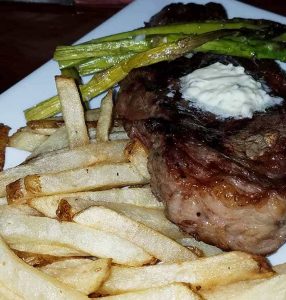 I also enjoyed how light this dish was as the evening we went was hot.

My husband ordered the Scale House Steak and Frites. The meat was perfectly cooked to a medium temperature. It was served with herb butter and a side of grilled asparagus over fries. The steak could have been seasoned more, but overall it was delicious.

One of our fellow diners ordered the Butter Poached Lobster. This dish was the best at the table featuring claw and tail meat poached in butter, dressed with lemon, and arranged beautifully on the plate. 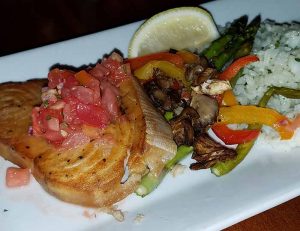 As most lobster lovers know, it doesn’t need much to be an amazing dish, but the Scale House did a wonderful job in preparing it. The meat wasn’t overcooked, was served warm, and was well paired with an herbed basmati rice and grilled asparagus.

Our second guest at dinner that night ordered the Swordfish. Unfortunately, this dish was a little overcooked. The flavor was delicious and the fish had been seasoned nicely, but it was too dry for my liking. My husband on the other hand prefers his fish a little overcooked and liked the tougher texture.

On this night we kept our cocktails fairly simply. I enjoyed a pre-dinner Cosmo while my husband and his sister both ordered extra dirty vodka martinis straight-up. We then ordered a bottle of wine for the table. Their wine list includes a wonderful selection. 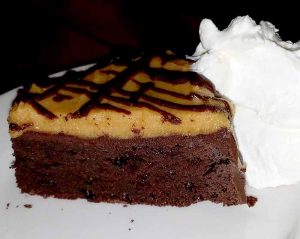 I normally have to forgo dessert as there just isn’t room. But with a table to share, we were able to order two options from the dessert menu, the chocolate cake with peanut butter frosting and a lemon cheese cake.

The peanut butter frosting was wonderful. I have had this frosting at other restaurants where it is heavy and dense, making the dessert hard to eat. That was not at all the case at the Scale House Restaurant. Spread over a moist chocolate cake, this creamy rendition did the job of brightening the deeper flavor of the chocolate.

But, the lemon cheese cake was out of this world! 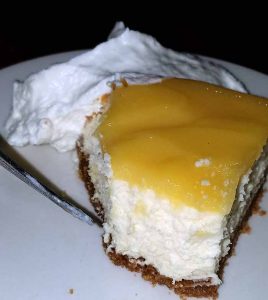 A dense cheese cake that was incredible on its own was covered in a lemon curd that was sweet and tangy at the same time. The freshness of that lemon added one dimension to the dish, while there was just enough sourness left so that the lemon wasn’t lost in the flavor of the cheese cake. We all agreed that it was the perfect way to end our meal.

The Scale House Restaurant in Hardwick, VT has brought something new to the NEK Restaurant scene. From the décor to the plating to their flavors, there is so much potential for this business.

The price point is higher than other restaurants in the region. But, this restaurant does bring fresh seafood straight from Massachusetts, allowing them to have the freshest seafood possible. They use a lot of local and regional ingredients in their dishes, and that adds wonderful flavors and quality to the menu.