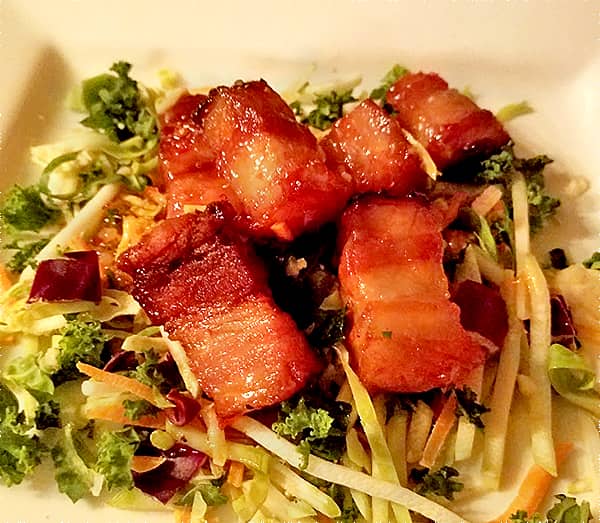 Pros: Great Atmosphere; Amazing Food; Local Ingredients (Including Local Beef); Plenty of Parking; Plenty of Dining Space; Full Bar; Music; The Upstairs Allows You to Enjoy Your Meal Without Being Drowned Out by Bar Music

Downside: Hidden; A Trek to Get to From Most of the Area; They Get Very Busy

We recently tried the Burke Publick House restaurant in East Burke, Vermont. This pub blew us away. To begin with, the décor is perfect for the area – a rustic barn like feel, with the comfort of your local pub. We were impressed with the inventive menu, filled with traditional pub foods like Scotch eggs and Bangers and Mash; regional favorites with a twist like their Poutine; and a few surprises from their own kitchen. 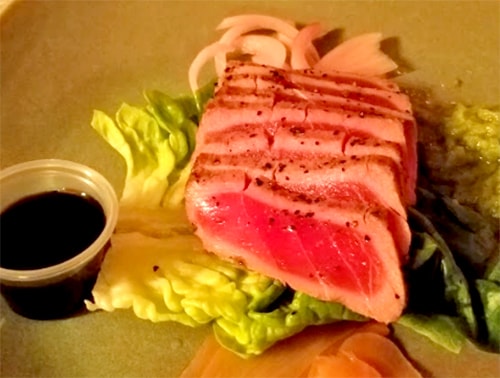 I will dive right into the food – which is what we did when our first appetizer arrived. We had decided on the Man Candy. This dish of smoked pork belly was fried in a sweet chili sauce that was almost caramelized on the meat. I have to say, this is one of the most delicious things I have ever tasted, and I found myself wishing there was more. Luckily it came on a bed of Brussels sprout slaw that was also delicious.

That appetizer set the tone for the food that followed. The Bigeye Tuna appetizer consisted of sushi grade Ahi, seared to perfection and served with a Wasabi mayo. My husband thought the mayo was too mild for the tuna, but I enjoyed it.

We tried a few other apps including the wings, tossed on an adobo-bourbon glaze, and the spinach-artichoke dip with bread. The wings had a good 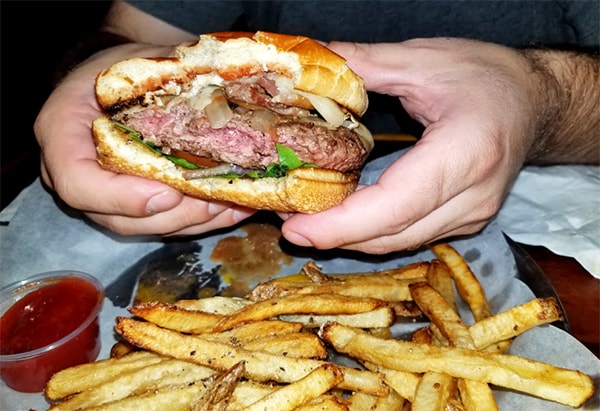 flavor, though there was no heat. The sauce was on the sweeter side, but the bourbon flavor was noticeable making for a more savory finish. The spinach artichoke dip was full of flavor. Served hot and bubbly, the taste of cheese, garlic, lemon, and roasted pepper came through. Lack of garlic is my number one complaint of most dips, but not this time. I was very impressed with it.

For entrees, my husband tried the Pub Burger and I sampled the clam chowder. The burger was made of NEK grass fed beef. Piled with veggies, a garlic pickle, and the added options of bacon, cheddar, and a fried egg, I was amazed to see how well the brioche bun held up. The burger came with a pile of fries, and tasted as good later on (we had to get a doggy bag) as it had fresh.

The chowder was unlike most you get in the area. It was thick enough to be a stew but so full of flavor you’ll want to lick the bowl clean. Large chunks of clam and a well spiced base made this an incredibly satisfying meal.

In addition to such a delicious meal, the bar produced a few inventive cocktails that I suggest everyone try.

We’ll start with the Dilly Bean Martini. As our loyal readers have learned, my husband is on a mission to find the best Martini in the Kingdom. This comes very close. Made with Vermont’s own Green Mountain Vodka, this cocktail replaces traditional olives with dilly beans. For those that don’t know, dilly beans are green beans pickled in a dill brine. This brine made for a mellow martini with a distinct flavor, and enough salt to satisfy those that like their cocktail dirty.

I started my meal with the Caledonia French – a cocktail made with Barr Hill Gin (out of Hardwick), lemon prosecco, sugar, and more lemon. This drink has a fresh taste, and I loved the bubbles. Later I tried their Sangria Punch. I am a Sangria fan, but this was more than that. The addition of peach schnapps and hard cider toned down the bitter, astringent aftertaste of the red wine making the drink finish sweet.

More on this East Burke Pub

While we were there local musician named Richie Hackett was playing. Down in the bar area, it was quite loud. But upstairs we were able to easily have a conversation over the music while still being able to hear it.

We also made note of the many televisions throughout the pub. With perfectly placed couches, this looks like the place to watch a game.

A few things to note: I had wanted to try their Poutine – but when an order came out for the table next to me, the monstrous plate was more than I could handle myself. I suggest getting this as a table app for at least four people. There is a menu item called the MOAB (Mother of all Beef). This $50 24oz porterhouse could be a meal for a crowd as well – it is on our list of things to try at some point. I am also excited to try the Scotch egg – as I have never had one. As you can see, we are already planning out next trip to the Publick House.

For more information and hours visit