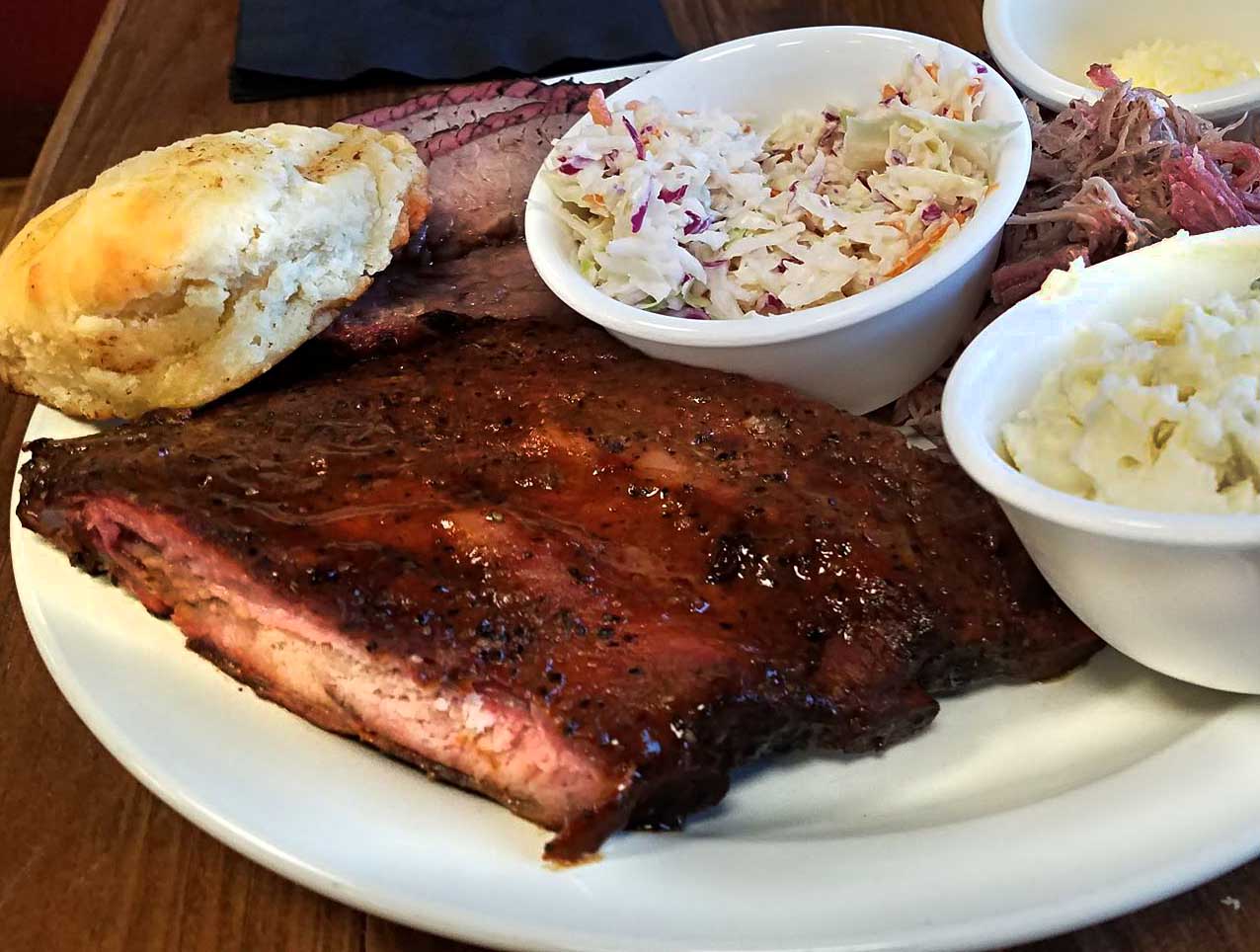 Downside: No Heat to the BBQ

Goob’s Barbecue may be a funny name for a restaurant in Derby Line, Vermont but there is nothing funny about the food they serve. We have been meaning to swing up to this eatery for quite some time, though it is a little far from our current location. But, after eating there on a recent trip, the distances is no longer an issue – we will be going back! 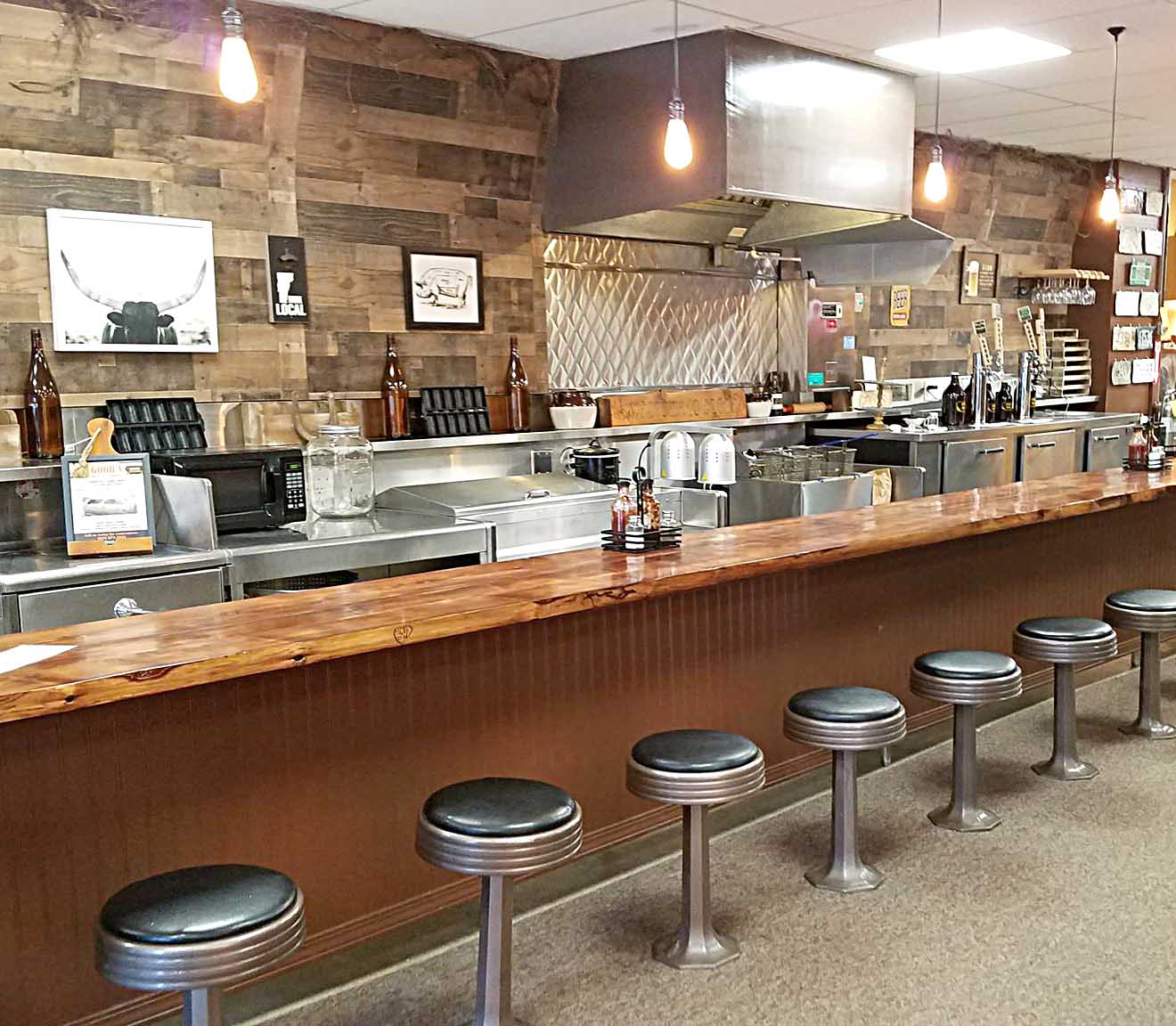 Upon walking in, you are greeted with pictures of the old grocery store that used to be there. Other old photos of Derby Line grace the walls, as do the old store signs that the local community has donated – proudly displaying names of businesses once essential to the town. These historic items bring a sense of community, family, heritage to the restaurant as well as add to its décor.

You are immediately at ease when you come into the restaurant. During the day, bright light floods in from the store front windows. Those passing by are enticed by the picture framed by these windows, and the delicious things being brought from the kitchen. 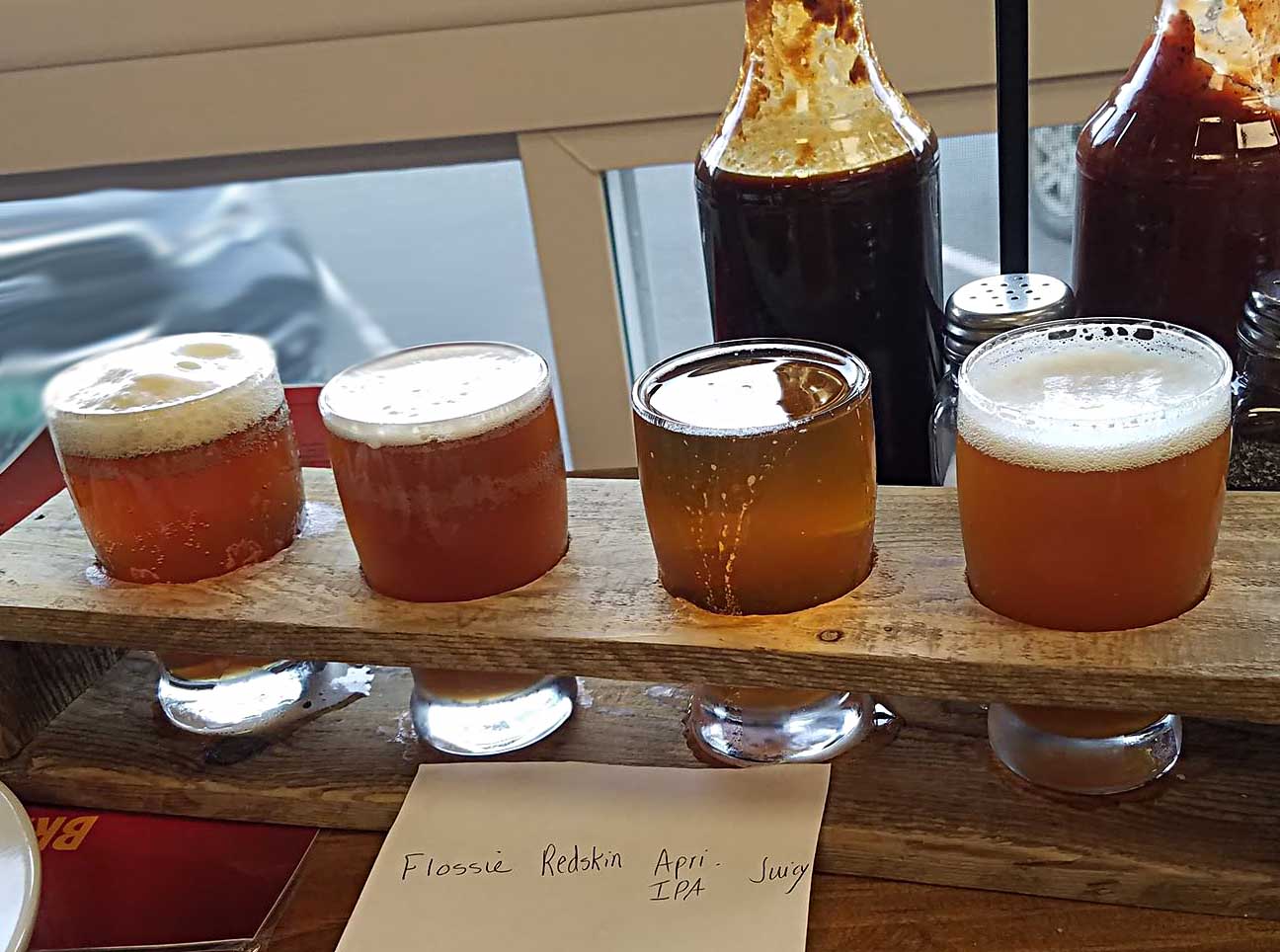 You know you are in a barbecue place as the smell of smoked meat is fantastic. The kitchen is open, situated behind a bar that runs most of the length of the room. The dining space is broken up into sections, one on each side of the door – in front of store front windows, another straight in from the door – behind the hostess stand, and a fourth area deeper into the restaurant space. There is also counter seating.

On our visit, we were immediately seated and offered menus. We discovered that Goob’s is also a brewery – with the back space of the old grocery store dedicated to brewing. So we started out with a couple of drafts. I had their cider and my husband tried the Buzz-On, a golden pale ale with a bright crisp taste. 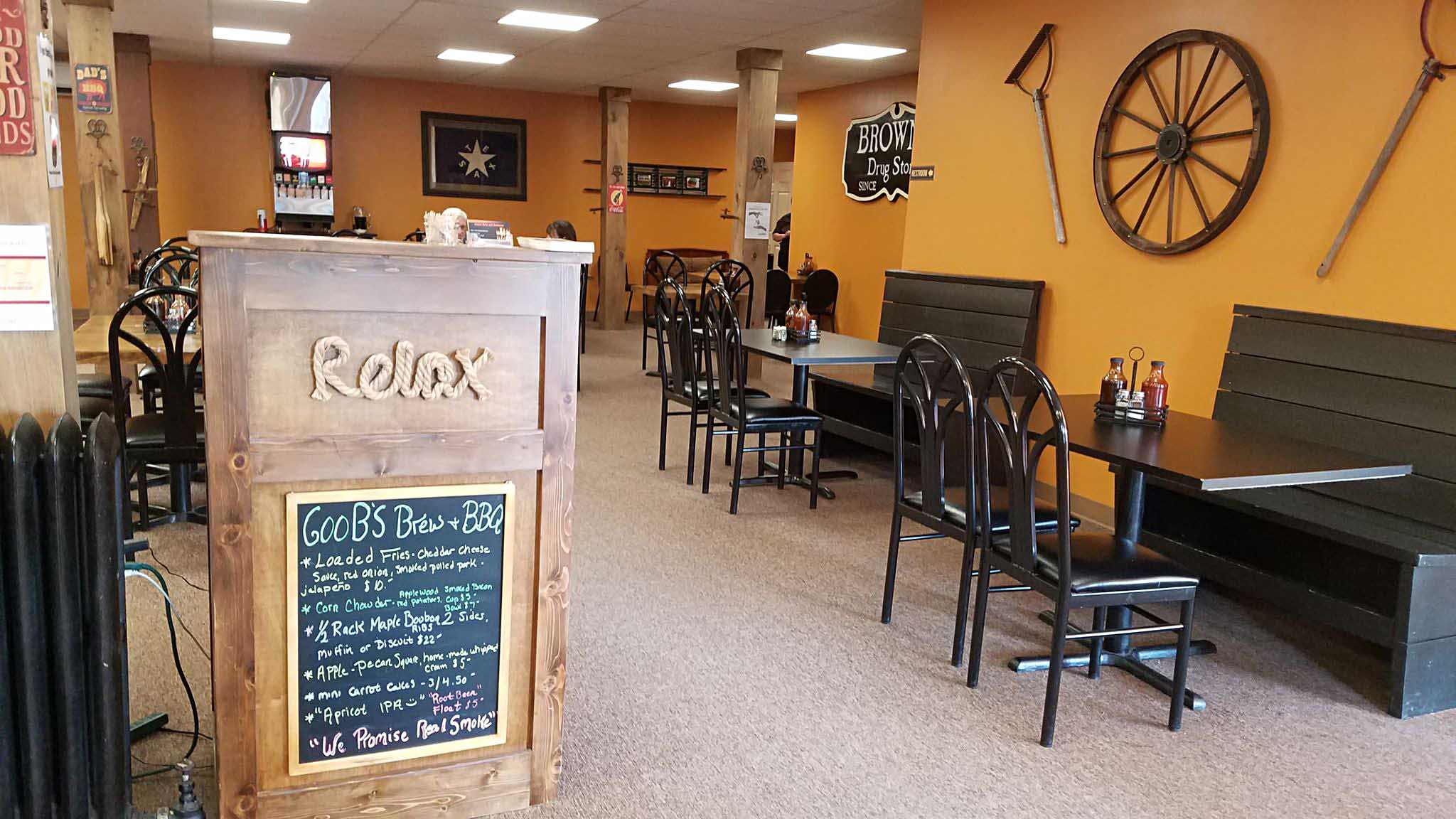 We were soon very interested in their beer and ordered a tasting flight. It included the Bossy Flossy’s Hoppy Amber – a slightly malty ale with toffee notes; the Redskin 56 – a red ale that is quite light with a bit of toasted malt flavor; the Juicy – an IPA with strong citrus notes; and finally the seasonal Apricot IPA. This was our favorite!

It was so fantastic we ended up getting a growler to go home with us. This is a seasonal beer though so we recommend swinging in and grabbing it before the end of summer.

The first things we ordered to try were off the appetizer menu, Starting with their poutine flatbread pizza, cooked in the smoker. The crust came out as a flat dough covered with cheese, French fries, and covered in gravy. 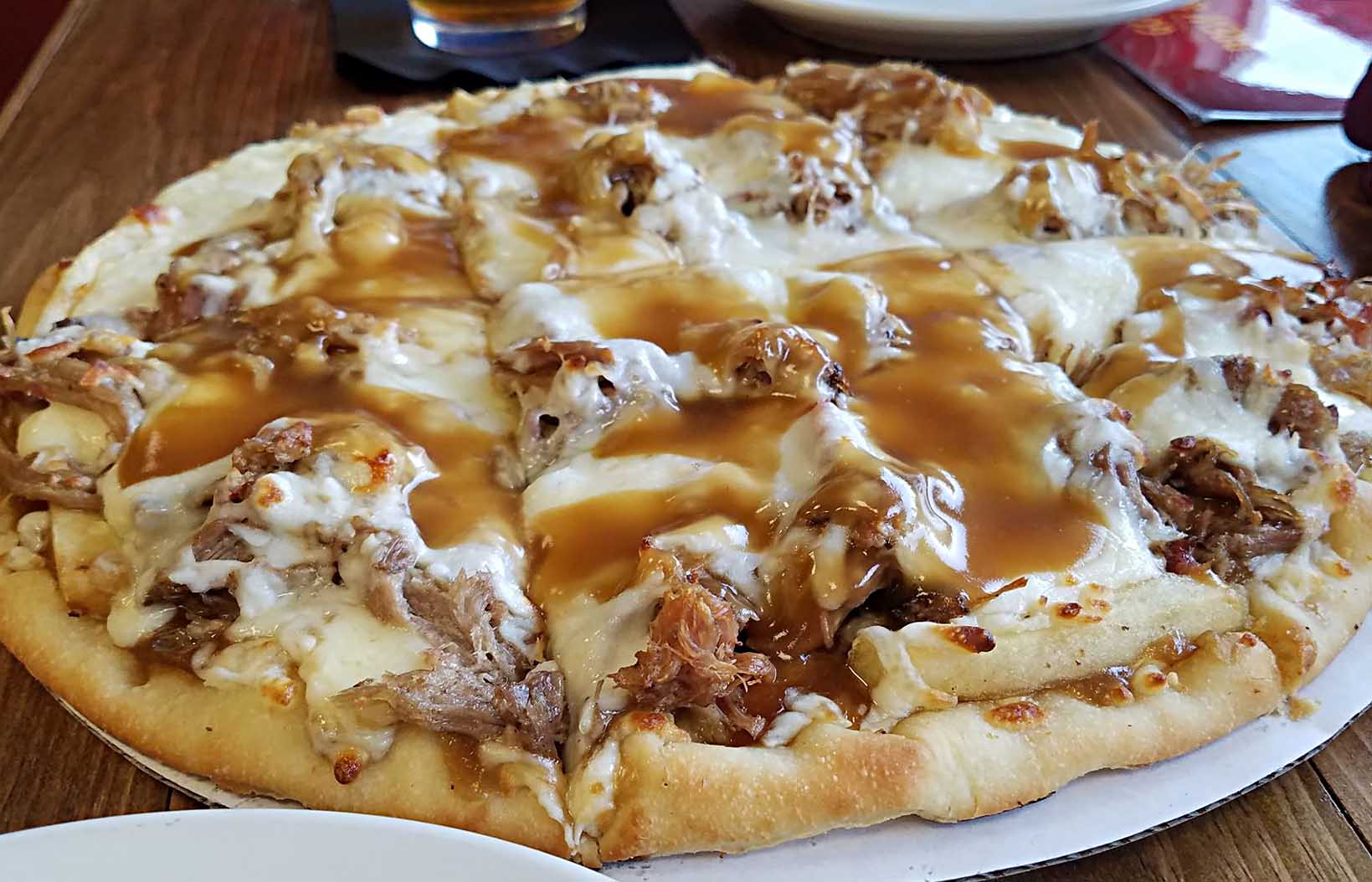 The overall taste was exactly as you’d expect. Like a poutine. I did find the crust a little tough for my liking, and adding the French fries in addition to the crust was a little too much breading. This may just be a preference thing, if you like tougher crust then this is the type of pizza for you. For those used to softer crust, just be aware of what you’re getting. But, the flavor and uniqueness of this dish make it worth a try.

We also ordered the cornbread cups.

This was the highlight of our evening. Housemade cornbread muffins, hollowed out and stuffed with Goob’s pulled pork, topped with coleslaw, and drizzled with their barbecue sauce. The plate came out with two muffins. And I had wished it was more. Taking a bite of these muffins is all of the best things about BBQ in one single bite! 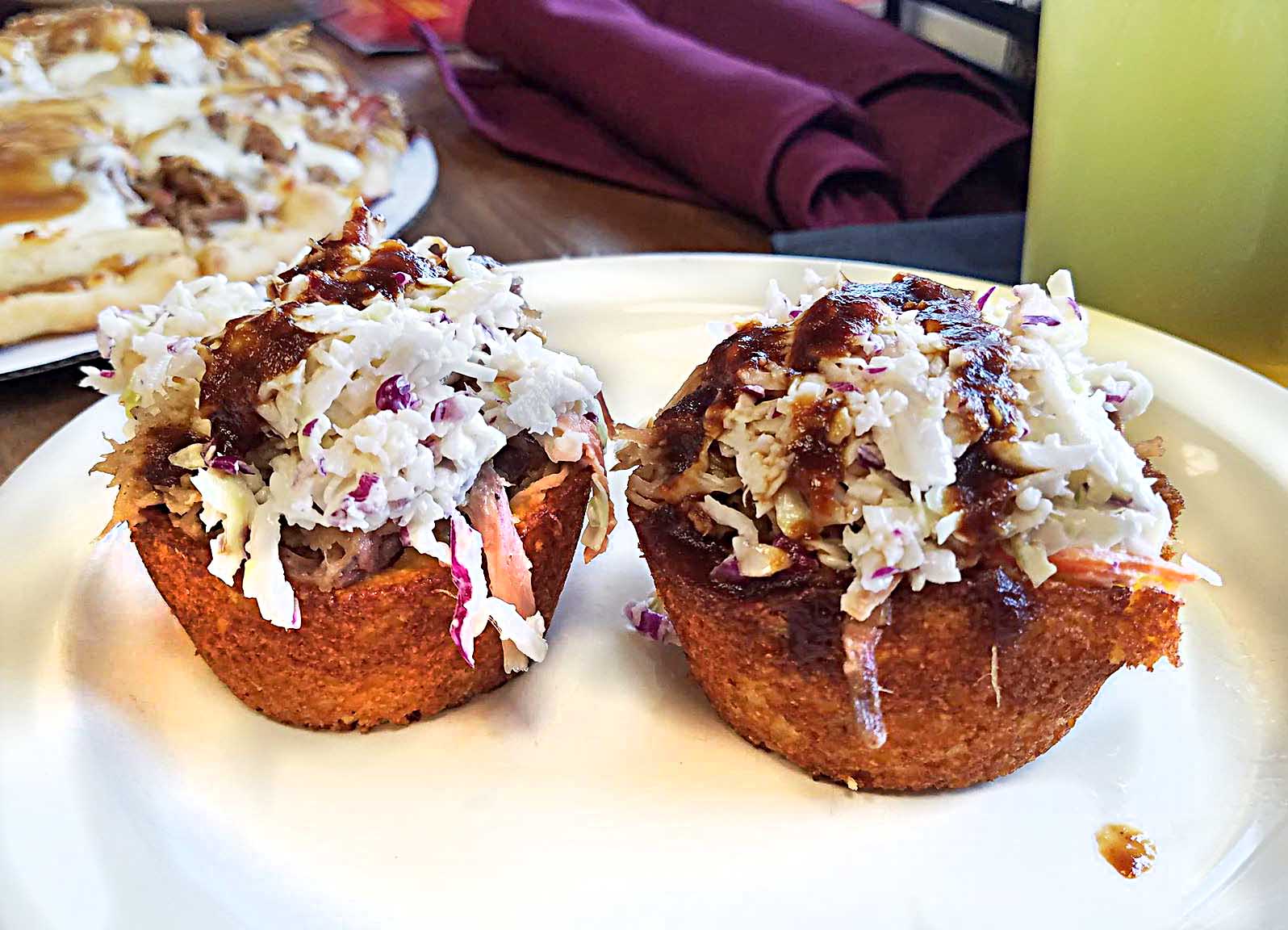 It was absolutely incredible! I am still telling everybody I know about it and have mentioned that I may be taking a trip to Derby Line especially to satisfy my craving.

For dinner my husband order a meat sampler platter. This allowed him to try the brisket, the pulled pork, and the ribs. The brisket was smoked to tenderness, with a nice dark ring around the edge. It was full of nice smoky flavor and just lightly brushed with their Sweet BBQ sauce. The pulled pork was unlike most that you get in the area. It came without barbecue sauce. It was smoked until the fat melted down, then was shredded into good size chunks that were easy to eat. The meat melted in your mouth, and having it served dry was fine as the restaurant’s house bbq is right on the table. 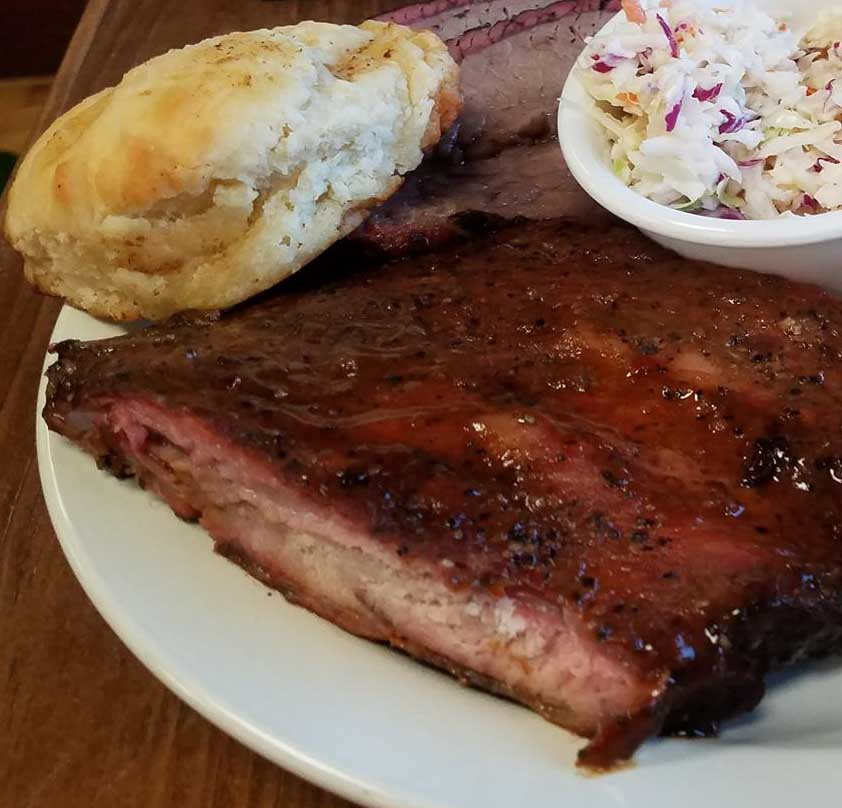 The ribs that came on the platter were spare ribs. We were told that these are bought locally as much as possible. They were a little on the smaller side, but that didn’t stop them from having a big flavor. There was a nice char on the outside, which is my husband’s favorite part, and brushed with barbecue sauce. The meat was so tender it fell from the bone. Now this was a platter meant for a meal and there was way more meat on it then we could consume, especially having tried the appetizers. The leftovers made for a tasty snack later on, and I had a great lunch the next day.

Knowing that we had this platter coming, I stuck with something fairly small for dinner. I chose to get another item off the appetizer menu – the sliders. The order comes with two sliders and you get to choose the meat for each. I ordered one with pulled pork and the other with pulled chicken. 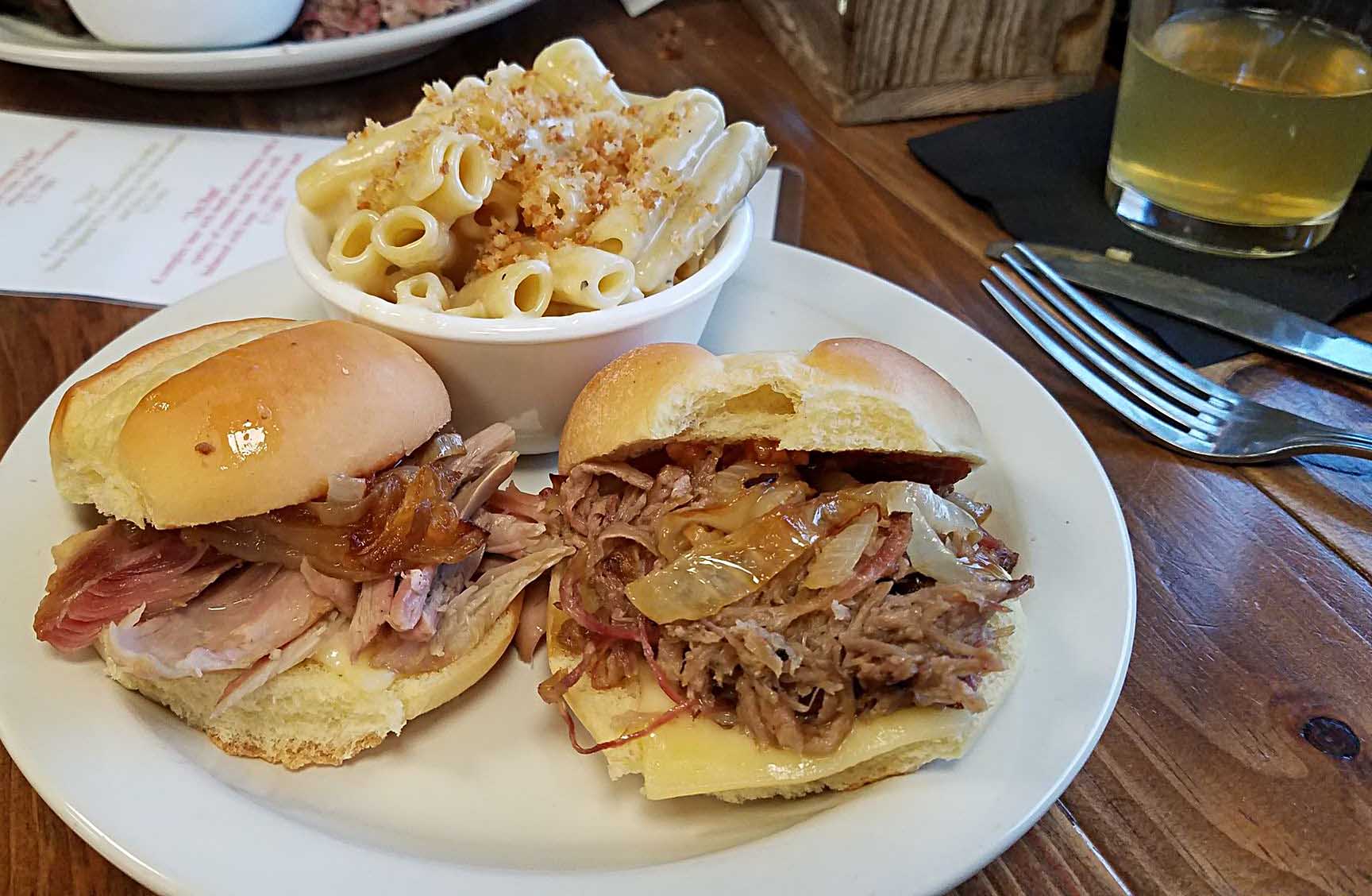 The other slider gave me the opportunity to try the pulled chicken. Served in the same style as the pulled pork, this meat has a lighter flavor that takes on the bbq sauce well.

Goob’s makes two bbq sauces in house. One is just sweet, while the other has more spice to it, but both are definitely northern BBQ sauces and contain little to no heat.

We were really impressed with Goob’s Restaurant in Derby Line, Vt. With good BBQ, house brewed beer, and an inventive approach to customer favorites, Goob’s seems to have found a place in the hearts, and bellies, of their surrounding community.