A Culinary Gem in the Crown of the Kingdom 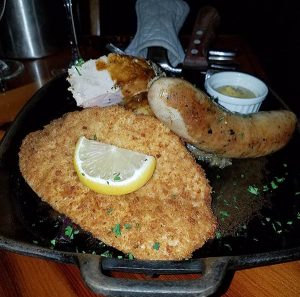 Downside: Driving in Derby Line Can be Intimidating As It Is A Border Town and Roads Can Be Confusing; Being In Derby Line Makes It Quite A Drive From Many Other Towns in the Kingdom

We recently had the pleasure of visiting the Derby line Village Inn restaurant. It was a fantastic dining experience.

Authentic German Cuisine at this Restaurant in Derby Line

For starters we drove up to the Inn amidst falling snow, giving a magical air to the place from the beginning. On entering, we were greeted with tasteful seasonal decorations. Every room (from the dining room, to the bar, to the Inn’s sitting area) was trimmed for the holidays. 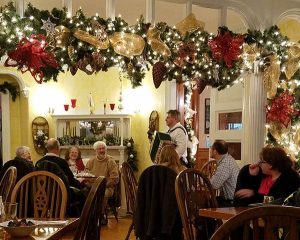 Soon after entering and taking our seats, we were brought menus and the wine list. While trying to decide what to order the owner Fritz entered the dining room with his accordion regaling all those present with music.

As if all of this wasn’t already magical enough, the menu itself was astounding. The regular items consisted of authentic German food like schnitzels, house made bratwurst, and sides of sauerkraut, pickled cabbage, and potato pancakes. At the back of the menu was a list of monthly specials – by the time we had seen this menu we had already ordered our first appetizers and that was a good thing because there were so many items to choose from.

We started our meal with a tuna sashimi and smoked salmon plate and a goat cheese spinach strudel. Before our appetizers even got to our table we were brought a large bowl of salad and warm bread with a tomato pesto spread. We were surprised by the salad which we had not expected. It was large enough to feed the three of us at the table. I was especially excited about the pesto spread as I have never tried tomato pesto. I could have eaten the entire bowl.

Our appetizers soon arrived. In addition to the fish and pastry, we also ordered a bowl of mussels and pirogues. The pirogues may have been 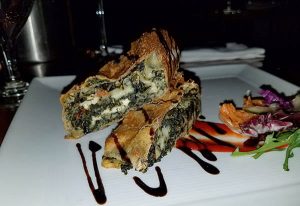 my least favorite due to the texture but the flavor was there. The salmon had been smoked at the restaurant using a cold smoke technique, and the tuna was served with a tasty wasabi mayo. But the showstopper on this plate was the potato pancake – crunchy with a warm soft center, seasoned and fried… I didn’t pair it with the fish as I couldn’t stop eating it alone.

The strudel was heavenly – light flaky dough filled with a savory spinach and goat cheese filling created a combination beyond compare. This was offset by the bright astringent flavor of the balsamic reduction drizzled across the dish. There is nothing quite like this savory pastry anywhere else in the Kingdom (at least not that we have found so far).

For dinner we ordered the Oktoberfest Platter filled with traditional favorites: pork loin, bratwurst, and schnitzel served over sauerkraut, red cabbage and a potato dumpling. Everything on the plate was delicious. The schnitzel was crunchy, well seasoned, and well cooked. We were told the bratwurst was made in house as well and was everything you could expect from a German sausage. Spicy but not hot. The side dishes

of cabbage and sauerkraut we’re full of flavor – nothing compared to what you buy at the store. The contrast of savory meats against the  sharpness of pickled cabbage is a flavor profile uncommon in this region.

We also tried the Schnitzel poutine. The same chicken schnitzel from the menu graced the top of hand-cut fries covered in a thick beef gravy. My only complaint about this dish was that there really wasn’t enough gravy in it but that was easily remedied by asking our server for an extra side of it.

For dessert we moved into the bar area – another gorgeous space at the inn. We tried the sweet potato cheesecake. This was as decadent as it sounds – on top of a typical cheesecake was a sweet potato concoction reminiscent of “Grandma’s sweet potato pie” (I have had a few of these southern special recipes over the years). I also tried their Chocolate Sensation – a chocolate mousse cake with almond paste. I have no words – but none of it made it into a to-go box!

While in the bar we had time to chat with the owner, Fritz, his wife, and his son (who had waited on us all night). We learned about how Fritz grew up in Austria and how he landed in culinary arts. Growing up in war torn Austria, he told us he had wanted to be a barber – but his father told him that when money was tight people cut their own hair. Then he wanted to be a pastry chef, but settled on being more of an all around culinary genius. That love for pastry still shines through though, as was readily apparent in the strudel we had during our visit.

With dinner we had stuck with some cocktails and a glass of wine, but with dessert we splurged on a traditional German holiday drink called Glihwein (glowing wine). A mulled wine with more citrus flavor than the mulled wines and ciders common in the area (these are more spiced based). 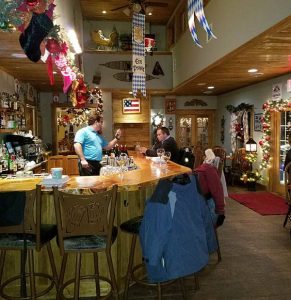 The drink was served with two slices of Stollen, a German Christmas bread filled with candied fruits and nuts – but nothing like fruit cake. Bread-like in texture, not soaked in alcohol, and the candied fruit and nuts are natural (not the dyed stuff found in many fruitcakes). It was served with powdered sugar to add another layer of sweetness.

The total experience at the Derby Line Village Inn was spectacular from beginning to end. I am looking forward to returning in the future to see what surprises await.

Oh yeah – and they have a Sunday Brunch!